Misdiagnosis and What To Do About It 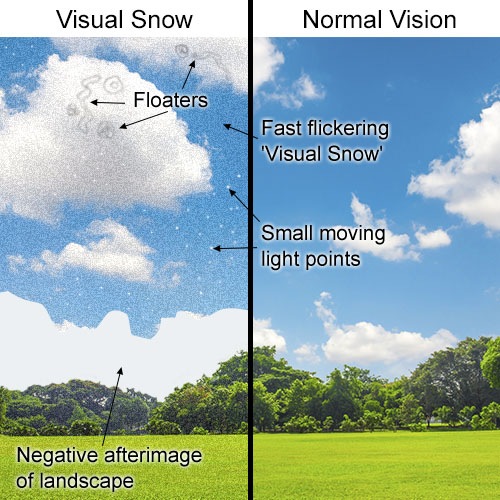 There’s a common experience shared among VS and HPPD patients — the goose chase. Many begin to experience symptoms and reach out to their doctors, only to be given a misdiagnosis. Then the prescribed treatment does not work, they move to the next doctor to repeat the cycle. Eventually, many are led around the country and the world seeking out experts, only to be continually misdiagnosed.  Below, you’ll read about some common misdiagnosis and why these conditions are distinctly different than VS and HPPD.

Is the sky blue today? If so, go outside and look up. Pay close attention and you’ll be able to see little white streaks shooting across the field of vision. This happens because white blood cells shoot in front of your retina. The blue quality of the light coming into your eye allows you to see these cells move. Virtually everyone on earth can see this phenomenon. Blue Field Entoptic Phenomenon is distinctly different than VS or HPPD because it is a mechanical function of the eye instead of crossed wires in the brain. Most everyone with VS or HPPD has a healthy functioning eye.

The inside of the eye is made of a liquid. Sometimes debris gets caught in the liquid. When the debris is in front of the retina, you can see the shadow of the debris, commonly referred to as a “floater.” These floaters accumulate with age and never go away. They can most often be seen when looking at a light background, like a clear blue sky. Many VS and HPPD patients undergo a dangerous treatment that drains and replaces the liquid of the eye to remove the misdiagnosed cause of the visual disturbances. But VS and HPPD are diseases of the brain, not the mechanical function of the eye. Draining and removing these floaters does nothing to alleviate the visual disturbances.

Many doctors will write-off HPPD as an LSD Flashback. Flashbacks are when someone who has taken LSD randomly experiences an hallucinogenic episode without taking the drug. These flashbacks can pop up years after taking the drug. But flashbacks are distinctly different than HPPD because flashbacks have a beginning and an end. HPPD is persistent. Those in a flashback may have problems understanding what is real and what is imagined. HPPD patients know their visual disturbances are not real.

If you are experiencing the goose chase and beleive that you have either VS or HPPD, go to our AwarenessAwareness page to printo out a leaflet. Bring it to your doctor and refer them to the NNRF. Chances are that your doctor is simply unaware of these diseases.