The medical community is undereducated when it comes to Visual Snow and Hallucinogen Persisting Perception Disorder. Many doctors will misdiagnose VS and HPPD, putting patients through unneeded and potentially harmful treatments for a disease they don’t have. While doctors may believe that VS and HPPD are a variety of other diseases, you’ll find the most common misdiagnosis below: 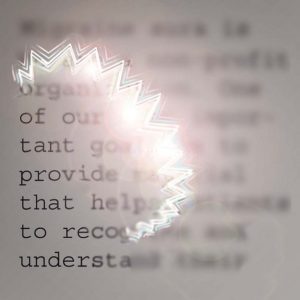 Some who suffer from migraines can feel the headache coming on days ahead of time. “Pre-headache” symptoms that gradually worsen until the onset of the migraine include blurry vision and sensitivity to light. But some experience visual disturbances doctors call a visual aura leading up the headache. Patients may see squiggly lines, static or zig-zags in their field of vision. Aura comes on gradually and then interrupts the patient’s vision for no more than an hour just before the headache comes on.

Migraine aura is distinctly different than Visual Snow or Hallucinogen Persisting Perception Disorder. Aura is temporary, rarely lasting more than an hour, and is accompanied by headaches. VS and HPPD are persistent and do not necessarily coincide with any other symptom, including a headache. 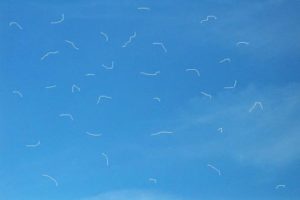 Everyone can experience this phenomenon if asked to concentrate. Small white objects shoot and squiggle across the field of vision when looking at a light blue background, such as a cloudless sky. These small objects speed up in bursts and travel in synch with every heart beat. The blue color of the background allows you to see white blood cells pumping through capillaries just in front of the retina.

Everyone is born with clear liquid in the vitreous portion of the eye. Age causes this clear liquid to degenerate. Tiny particles and pieces of debris begin to accumulate inside the eye. Shadows cast by these particles can be seen as the floater moves in front of the retina. Floaters can look like little balls, pieces of string, zig-zags or spider webs. This entoptic phenomenon is most commonly noticed when looking at a clear, light background, like a cloudless sky. These floaters tend to drift through the field of vision in a pattern. The drift pattern starts over after the eye blinks.

This condition is universally experienced. Just about everyone on the planet has vitreous floaters and will notice them during their lifetimes. Some have more floaters than others, and the sudden onset of floaters can mean there is structural damage to the eye. Some VS and HPPD patients may undergo a dangerous procedure where the eye is drained to eliminate the misdiagnosed cause of the visual disturbances. VS and HPPD are different than vitreous floaters because the sensory diseases live in the brain, not the structure of the eye.

Flashbacks can occur days, weeks or even years after using a hallucinogenic drug such as LSD. A flashback is marked by a complete hallucinogenic trip without taking the drug. The person experiences severe visual disturbances and extreme sensations as if they were once again on the drug. Those experiencing a flashback may have difficulty knowing what is real and what is imagined.

Flashbacks are distinctly different than Hallucinogen Persisting Perception Disorder in a few different ways. First, flashbacks come and go; coming on suddenly and leaving just as quickly. HPPD is persistent, never stopping or restarting. Secondly, HPPD patients know exactly what is real and what is imagined. A person suffering from a flashback may believe they are in an alternate universe or a dream. Third, HPPD is primarily marked by visual disturbances. A person in a flashback will feel a variety of sensations.