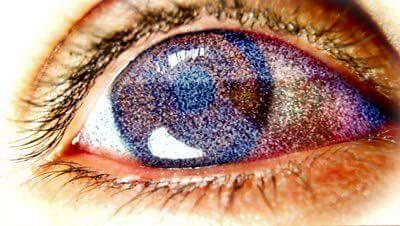 Visual snow or visual static is transitory or persisting visual symptom where people see snow or television-like static in parts or the whole of their visual fields, constantly in all light conditions even visible in daylight. The severity or density of the “snow” differs from one person to the next; in some circumstances, it can inhibit a person’s daily life, making it difficult to read, drive, perform routine tasks, see in detail (even in bright daylight) or focus correctly because of afterimages and other visual and non-visual symptoms.

Little is known about this rare condition, and it has conventionally been regarded as a variant of migraine aura—though recent research shows this is not the case. Visual snow is now regarded as a unique syndrome—usually presenting with other symptoms, such as persistent afterimages, photophobia, enhanced blue field entoptic phenomenon and tinnitus.

Unlike Hallucinogen Persisting Perception Disorder (HPPD), which is derived specifically from the use of hallucinogenic drugs, Visual Snow itself is more commonly acquired without the use of drugs. While Visual Snow is still a symptom of HPPD the diagnosis is different depending on if hallucinogens or other drugs were involved in the development of these visual changes. The symptoms of both diagnosis are, for the most part, practically identical.

Visual Snow from Hallucinogen Persisting Perception Disorder (HPPD) is commonly referred to as “Aeropsia”, which is a Greek word that means “Seeing Air”.