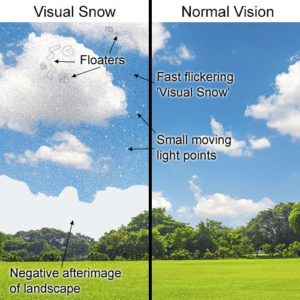 What it looks like to have mild visuals snow.

Other symptoms that may accompany visual snow

Positron emission tomography scans from a major 2014 research trial provided evidence that Visual Snow is associated with Hypermetabolism within the Lingual Gyrus and left Cerebellar Anterior Lobe of the brain.
Migraine Auras are one of the most common causes of unlocking Visual Snow symptoms in an individual. Another factor includes Optic Neuritis which is inflammation of the Optic Nerve. Lyme Disease and Auto-Immune Disease are a couple more contributing factors to an individual experiencing Visual Snow, and of course hallucinogenic usage.

To date there is no known cure for Visual Snow. Benzodiazepines are one such medication that have been used to help alleviate symptoms for both sufferers of Visual Snow and Hallucinogen Persisting Perception Disorder, including Clonazepam (klonopin). The list of medication that have been shown to help diminish symptoms include but are not limited to:

While little is still known about Visual Snow it is still difficult to claim that there really is any “real” treatment at this point. While some prescription medication may help, there have also been reports that certain prescription medications have caused Visual Snow and similar symptoms. Many reports, of course, should be taken with a grain of salt due to lack of evidence and such little clinical research. One common claim is that Anxiety plays a large role in the development of Visual Snow, and this seems to be the best treatment, for now, is to try and alleviate the anxiety involved.